The Society of Jesus is a world-wide organisation of religious men, numbering about 16,000 spread over the world, of whom over 3000 are working in the provinces of India. In TamilNadu alone there are about 500 Jesuits working in schools and colleges, youth services and social work centers, in parishes and mission out-reach programmes, and in other forms of service and ministry associated with the church. 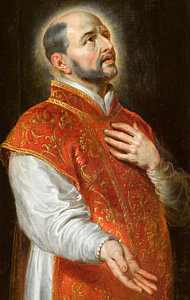 St. Joseph's College is an affiliated First Grade College of the Bharathidasan University. It was established in 1844 by the Fathers of Society of Jesus (The Jesuits). It was affiliated to the then Madras University in 1866. The College celebrated its centenary in 1944 and sesquicentenary in 1995. The College is owned by the Society of St. Joseph's, a body registered under Societies Regulation Act(1860), having its office at Tiruchirappalli. This Jesuit College trains young men and women of quality to be leaders in all walks of life so that they may serve the people of the nation in truth, justice and love.