The Camboulives Symphony Orchestra Band was established in 1896-98 under the aegis of Rev.Fr.Camboulives,S.J., a French Missionary. It is more than 100 years old. This band serves as a conservatory which prepares students for a professional career in music.

It draws on a long tradition of innovative study made in symphony music. The band provides a certificate validated by the Rector and the Principal of the institution. The main objective of the band is to provide intensive and systematic training to the aspirants in music education so that they can get placement in organisations like Central and State Police Bands all over India,the Government of India Defence Services i.e. Army, Navy, and Air Force, Public Transport Corporations, Railways; Post and Telegraph Services, BHEL, Neyveli Lignite Corporation and Five Star Hotels.

It was a delightful moment to the bandsmen when our beloved Scientist - President Dr A P J Abdul Kalam, enthralled by the melodies played by our College Band on the occasion of the 160th anniversary of the College (20th Dec.), deviated from the security protocol to shake hands with the band boys. He appreciated them for playing a 'fantastic' National Anthem. Coming from a musician-president, it was an appreciation that would be cherished for life by the bandsmen. Earlier during the day, when more than 8000 students had been kept waiting in the hot sun, the Band captivated the crowd with its lovely tunes.

Staying in tune with technology, the band has a computer-aided music teaching center that puts into use multimedia tools such as the 'Music Scultors' ( a simulation of the keyboard through the computers) for effective teaching of music. Student's performances are recorded in computer and played back to them so that they could judge their own standards. The training is entirely free of cost and all trainees are issued certificates when they pass out of the institution. "Along with music we also teach values", says Rev.Fr.Roche SJ, the Director. 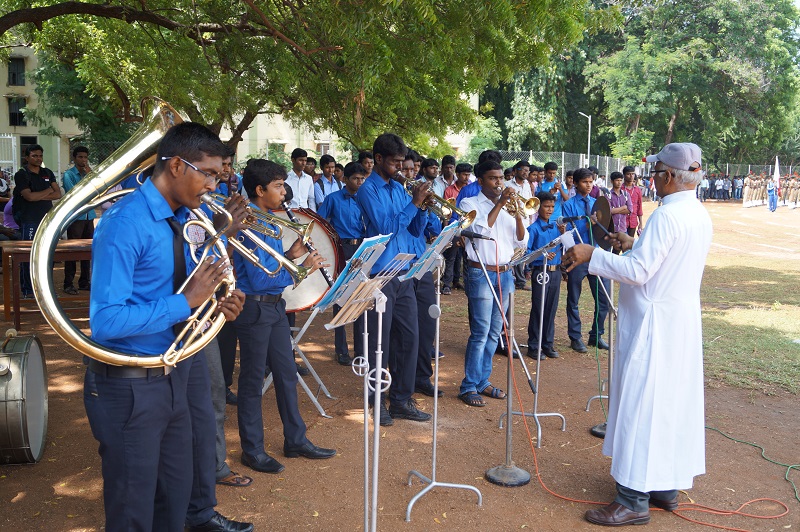 Band Masters - Down the Years